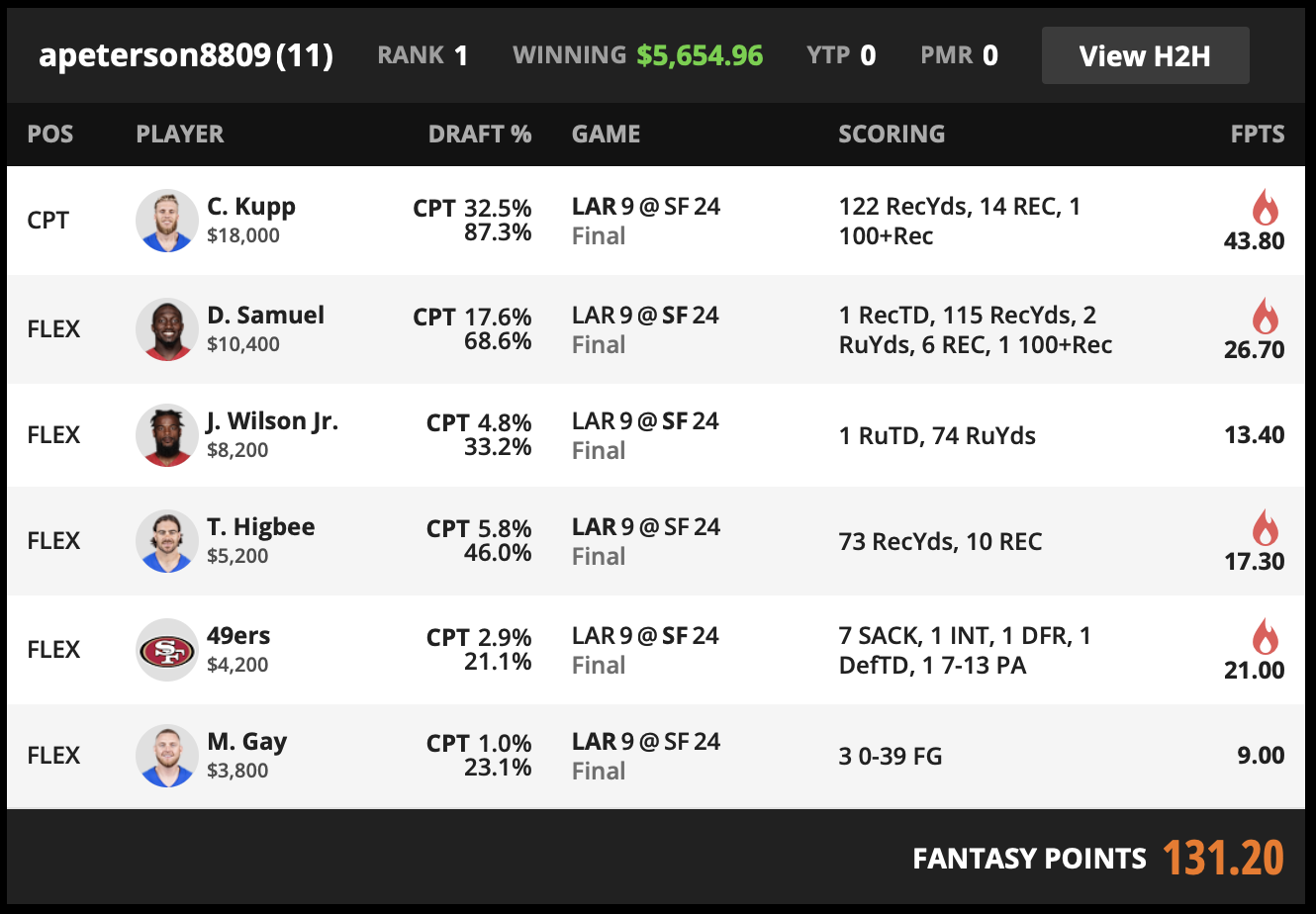 THOUGHTS: Massive milly chop last week but I am glad the core smashed. I ended up playing a total of 65’ish builds. I locked Cooper Kupp into my first run of 50 builds. I then added 10 Kittle CPT builds & I hand built 5 while on the bike. Deebo Samuel was very close to ruining the massive milly chop that we saw take down the big GPP on Monday Night. Let’s #RunPure and dive into tonights matchup between the Colts & Broncos.

BASE SABER RUN (NO CHANGE TO PROJECTIONS) 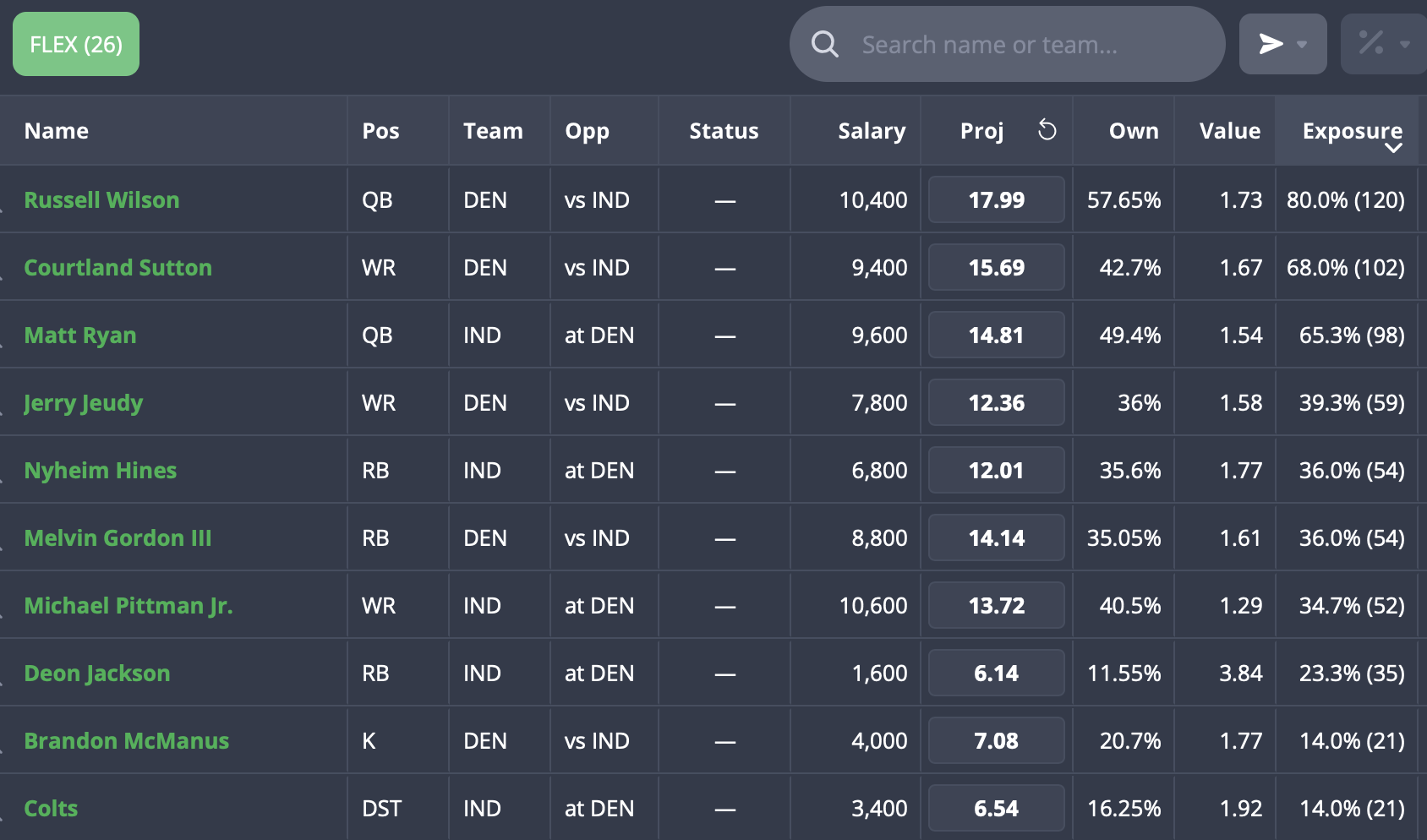 THOUGHTS: Tonight’s slate sets up to be very interesting as both squads will be without their starting running backs (Jonathan Taylor & Javonte Williams). While each team has struggled offensively, we did see some signs of life from Russell Wilson and the Broncos offense last week against the Raiders. I created a “list of things we need to figure out” before we can fully dial in our player pool, game-script and strategy for this slate; (1) figure out the RB situation and how to best approach these value plays, (2) build out a narrow CPT pool as we’ll have so many possible flex options, and (3) finalize a projected game script & make sure our path in Showdown formats aligns with it.

RB SITUATION: On the season, Colts have averaged 35% run plays while the Broncos averaged 36.7%. For the Colts, this has been due to unfavorable game scripts with them playing from behind (vs Texans, Jags, Chiefs and Titans, trailed in each game). I am working under the assumption that will be the case tonight; playing on the road here in Denver is always a tough task. In a trailing situation, I expect far more work, via dump offs, to Nyheim Hines out of the backfield. In sum, I want to give Hines projection a bump up while also bumping Phillip Lindsay & Deon Jacksons down.

Broncos just announced that Latavius Murray will not be active for tonights game. This means Melvin Gordon and Mike Boone will take on all of the work out of the backfield. Javonte Williams injured his knee on the first play of the third quarter last week against the Raiders. It is important to note, Mike Boone out-snapped Melvin Gordon 31.2% to 18.7%. Also keep in mind Melvin Gordon has struggled with fumbles; having four total on the year already.

What can we realistically expect from Mike Boone? While he looked decently explosive in his three attempts against the Raiders, I think we could see a true time share here against the Colts. Additionally, this Indy defense has been solid against opposing rushers. This sets up to be a spot where Russell Wilson will get it done through the air. In sum, I’ll be under projecting (not fading) both Denver RB’s.

PROJECTED GAME SCRIPT: While Russ and the Broncos lost on Sunday, it does look like they may have found something offensively. Russ was locked on both Courtland Sutton and Jerry Jeudy, both are playable in the same lineup in showdown formats. Also note, Kendall Hinton was their WR3, out-snapping KJ Hamler 56% to 8%. The TE situation is an absolute disaster and one I will be under on.

With most struggling to see this being a pro offense script, I do think we see some points here. I have the Broncos winning 27-20 with Matt Ryan and the Colts scoring a TD late in the 4th to spoil the fun for under bettors. My main targets on the Denver side; Russell Wilson, Courtland Sutton, Jerry Jeudy, Broncos DEF and Brandon McManus.

For me, this make things a bit more clear on the Colts side. Nyheim Hines is an absolute standout play for Indy. Even in a Broncos winning script, he’ll be the guy getting dump offs out of the backfield. I also think Michael Pittman is in play; sure, it’s a tough matchup but I am fine betting on talent. I also think their TE’s are in play; Mo Alie-Cox-Cox and Kylen Granson.