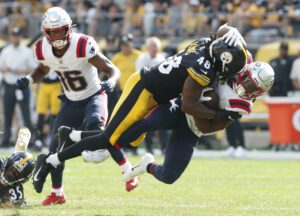 Both teams are coming off strange Week 2 games.

The Browns were stunned at home against the Jets — which ya boy predicted. But, despite the loss, the Browns looked strong. It was a freak ending, and the first time in 2,229 games, a team blew a lead of that size in under two minutes. Sometimes you just have to enjoy history being made and push on to the next Week.

The Patriots served the Steelers an L in a game that looked like it was from the 80s, with great defense, tons of punts, and just three offensive touchdowns. The Patriots won this game with a field goal 17 – 14.

I was stupid enough to jump off the Chubb train last week, but I won’t make that mistake again. The Steelers could not handle the Patriots’ run game last week, and the Browns are a force on the ground. Both Chubb and Hunt should receive their fair shares of carries. Chubb ran for 141 yards in Week 1 and 87 yards in Week 2; his Week 3 performance should fall somewhere between the two.

The Browns have scored at will this season, and while Pittsburgh will be the best defense they have faced this year, they won’t be able to contain Chubb, and any attempt to will just result in an easy aerial attack for Brissett. The Steelers’ offense has had problems finding their way this season, so while I wouldn’t advise the game over, Clevlands’ team over should be a lock.

If I haven’t made it clear yet, the Browns will dominate this game. We have seen a lot of upsets in the first two weeks, but this game is chalk. Bettors may even consider jumping on an alternative spread.