The Jacksonville Jaguars head to East Rutherford to take on the New York Jets. Both teams enter this game as a playoff contender, but a conference loss will likely bounce them from contention.

The Jets are trying to keep pace with the Miami Dolphins and New England Patriots. All three AFC East teams are fighting for the final Wild Card Slot, and this race should come down to Week 18.

While the Jaguars stand almost no chance at a Wild Card spot, they are in a position to take the AFC South if they can win their last three games. If they win here and next week against the Texans, their season will come down to their Week 18 match-up against the Titans, where the winner will claim the division.

C.J. Uzomah has been a real difference maker for the Jets this season. He is a tremendous blocker, but he also capable of breaking off a 30-yard reception at any given point.

Uzomah is a weapon, and while New York doesn’t go to him often, he is always ready when they do. His passing prop sits at a measly nine and a half yards. As long as he catches one pass, he should hit that. Easy play here.

Trevor Lawrence has been a freak since the Jaguars decided they wanted to start winning games. Lawrence has thrown for over 300 yards in Jacksonville’s last three wins, and in this stretch of six games, Lawrence has averaged 280 passing yards.

While players don’t typically play to their usual standards on Thursday Night, he can throw 100 fewer yards than he has in the previous two weeks and still crush his prop.

Both teams are playing great football right now, and this should be one of the best Thursday Night Football games we have had all season.

The under has bet an auto bet on Thursday Nights. However, these teams match up well, and the line is lower than it usually is. With how Jacksonville’s offense is performing, they should light up the scoreboard and take care of business in Jersey. 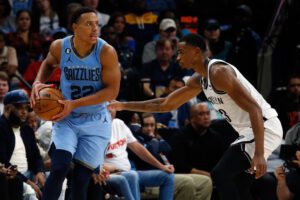