Zion Williamson and the Pelicans head to Texas to take on the lowly Spurs. San Antonio enters play as the third-worst team in the Western Conference — only the Lakers and Rockets have fewer wins.

While expectations were low for the Spurs this year, fans had to think Popovich had something up his sleeve. However, that does not appear to be the case as San Antonio allows far and away more points than any other team in the league — 120.9 points per game.

On the other side, is one of the highest-scoring teams in the league. The Pelicans average 117 points per game, that’s fourth in the association, and four points behind the league-leading Kings.

As a result, bettors can expect a New Orleans domination in San Antonio.

Zion Williamson is coming off a horrid performance in Golden State, despite his team crushing the Warriors 128-83. Zion scored 9 points in twenty-three minutes.

Bettors can fully expect a bounce-back performance from him tonight.

The LA Clippers hold an interesting stat line. They score fewer points per game than any other team in the league, but they allow the second-fewest points per game.

So while there are many great bets available tonight,  the under in California is one of the best available.

The last four times these teams met the under hit, and the under is 4-0 in Golden State’s last four home games.

This is a crazy line at 10 points, but there are a lot of factors to consider. Leonard, Kennard, and George are out for the Clippers. The Warriors have shown a lot of weaknesses this year, and they are coming off a 45-point loss to the Pelicans.

So while there is an argument this game could go either way, bettors should expect a bounce-back from the Warriors.

Points will be at a premium in this game, so bettors shouldn’t expect any crazy performances. 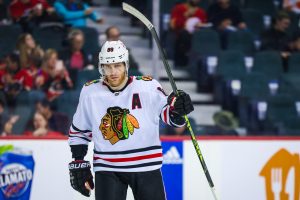 We’ve hit the NHL All-Star break and are two-thirds of the way through the season. With roughly 30 games to go,