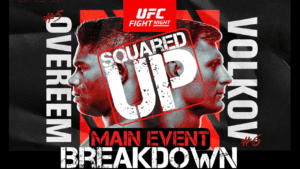 The UFC is back at the Apex on the UFC Campus in Las Vegas, Nevada for UFC Fight Night: Overeem vs Volkov, in what is a pretty underwhelming card if we are being honest. The card is full of fights that could go either way in my opinion. However the main event should be a solid watch when Alistair Overeem squares up against Alexander Volkov later tonight. Welp, now that the intro is done… Let’s get after it! 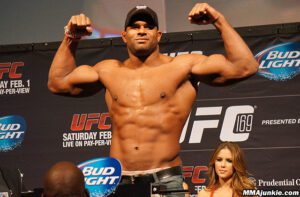 Alistair Overeem:
There are only three fighters in the conversation for greatest Heavyweight striker of all-time, Stipe Miocic, Fedor Emelianenko and Alistair Overeem. What Overeem has done in his career has been truly special. He is a former Strikeforce Heavyweight Champion, DREAM Heavyweight Champion, K-1 World Grand Prix Champion and one of only two fighters in history to hold both an MMA & K-1 Kickboxing titles at the same time. What gets lost in Overeem’s brilliant striking is a very underrated grappling game. He has excellent takedown defense and while Overeem does not come from a wrestling background he has a very solid base and top control game. He was once labeled the best heavyweight grappler in Europe before Josh Barnett and Fabricio Werdum took over the mantle. Overeem is now in the twilight of his career but his grappling is still serviceable. Overeem is one of the most accurate striker in the history of the UFC at just under 74%. However, even though he comes in off two impressive wins over Harris and Sakai in 2020, this weekend stands another challenge in Alexander Volkov. Can he stop a contender on the rise? Below is a look at Alistair Overeem, by the numbers.

― PROS ―
• Striking (Alistair Overeem is one of the greatest Heavyweight strikers in MMA history, period.)
• Clinch (Overeem’s clinch skills began in his kickboxing background and transitioned seamlessly to mixed martial arts. His left knee to the body has ended many fights, although in his latter years he has relied more heavily on his left kick to the body. Regardless, he is still deadly striking in the clinch.)
• Athleticism (Although Overeem is now getting up in age and is the oldest fighter on Saturday’s fight card, he has always been a phenomenal athlete and steps into he cage prepared and in shape every single fight.)
― CONS ―
• Chin (Alistair Overeem has had chin problems throughout every phase of his fighting career, but recently it has eroded substantially. It is the biggest con any Heavyweight fighter can have. Can you still win fights when a strong wind knocks you out? Yes. You become what Overeem has become, incredibly cautious. His chin was never great but, since his fight against Werdum at UFC 213 it’s been VERY SOLID aside from the freak ending in the Rozenstruik fight.)
• Age (One of Overeem’s greatest strengths in his entire career has now been eroded by father time. He has always been a physical freak. His speed, power and athleticism has taken him as high as you can go in the fight game. The problem is that age eventually kicks you right in the dick and slowly starts to take that all away. He may still look the part but he is 60% of what he once was. 60% is still enough to win fights though.)
• Chin (Did I mention that my 12 year old daughter might be able to knock him out on a good night? NO? Ok well….. I think you get the point.) 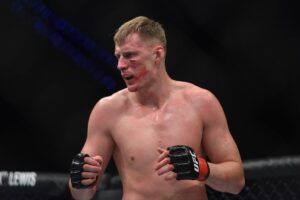 Alexander Volkov:
There isn’t much background I was able to find on Alexander Volkov. He graduated from a Moscow State Technical School in 2011. That was the extent of his schooling and early life on the internet. The story for Volkov really kicks off when he turned professional in 2008. That was when he signed a contract with M1-Global.
In April of 2009, Volkov made his pro debut against Nikolay Pleshakov where he won via TKO in just under 80 seconds. With a quick turnaround of only a month later, Volkov stepped back in the cage against Adam Alikhanov. Not to be outdone the first time around, he followed his first TKO win with another, this time in 20 seconds. Feeling as if he was unbeatable, he quickly found out that he wasn’t. Volkov suffered his first loss only 3 fights into his career at M1-Challenge #4 when he lost via submission to Akhmed Sultanov. By May 2012, Volkov had fought in some of the biggest promotions he could find over seas, but he was ready for a new challenge in a new place. He ended up signing with the 2nd largest US promotion in Bellator MMA. He debuted at Bellator 75 against Brett Rogers where he won via unanimous decision. Through 9 fights with the promotion he won 6 times. Finally, in November of 2016 he signed with the biggest MMA promotion in the world in the Ultimate Fighting Championship. Since entering the UFC, Volkow has won six of his first eight fights, and is now one of the elite heavyweights in the world. Volkov is knocking at the door of a title shot if he can string a couple wins together, and it starts tonight with Alistair Overeem. Below is a look at Alexander Volkov, by the numbers.

― PROS ―
• Striking (Volkov is a gifted striker for a heavyweight. Whether he fights in the pocket or uses his length to strike from range he has the accuracy, combinations and hand speed to give most heavyweights an issue.)
•Power (Although Volkov couldn’t put Derrick Lewis away a couple fights back, he had him hurt multiple times and was close to stopping him a few times. He has 21 knockouts in 32 professional wins. You don’t get that in MMA against heavyweights if you don’t have legitimate power.
• Stamina (In every fight that I could find on tape his cardio has looked phenomenal. He will be able to go 5 rounds tonight with ease should he have too.)
• Size/Reach (Genetics have gifted Alexander Volkov a built-in advantage in almost every fight he is in. When your 6 foot 7 inches tall and has the reach to boot you should be able to take advantage of it, and he has.)
― CONS ―
• Takedown Defense (It’s really really really, not good. Curtis Blaydes was able to take Volkov down 14 times. If that doesn’t say it all, what will.)
• Grappling (I have not seen enough from Alexander Volkov to know whether he is a legitimate grappler or not. The more we see of him the more we should see him in situations that expose what level his BJJ is on. From what I’ve seen thus far, it’s looked solid but not exceptional.)
•Pressure (With 6 wins in 8 UFC fights, Volkov has to know that an eventual title shot can’t be more than a couple wins away. He is in his prime, and the time is now for Volkov. How does he handle the pressure against a rugged veteran? That’s an unknown that I’m not exactly comfortable with.)

THE VERDICT
This has been a tough fight to call this week. I’ve gone back and forth all week long trying to decide where the play is in this fight, so here is what we know.
You absolutely can’t take Alexander Volkov tonight if you haven’t already taken him. He opened up as the slight dog in this fight, and you have now lost over a dollars worth of value. What does that mean? It means as far as your concerned it’s a dog or pass spot for you.
My gut says that Volkov will continue to take money in this fight and there probably won’t be a ton of buy back on Overeem. That means you should have an opportunity to grab Overeem at (+185) or better. The question is, can Overeem win this fight often enough to warrant taking the shot?
I think the fight sets up well for Overeem. There are some factors that bother me about backing Volkov tonight. I think he matches up quite well stylistically against Alexander Volkov, who I like as a fighter but my major issue with him in this fight is how bad Alexander Volkov’s takedown defense is.
Imagine being taken down almost 15 times in a fight? That’s hard to do. Curtis Blaydes destroyed him on the ground in that fight. So much so that you would be a fool not to factor that into the fight script.
Overeem probably won’t have as much success at taking Volkov down the way that Blaydes was able to, because I don’t think Alistair Overeem can grab fast double leg takedowns in the center of the Octagon as easy as Curtis Blaydes was able too. But even if Overeem doesn’t score double digit takedowns in the fight, he can still get enough takedowns in the cage to throw Volkov off his striking game.
As far as the striking matchup in this fight, I think Volkov has the edge, simply because of the volume that he throws, but I don’t think the striking matchup is so one-sided that Overeem is drawing dead, because even though Overeem is older now he is still a solid striker, and he certainly carries more power in this fight than Volkov.
The biggest concern with backing Overeem in general is he has been dropped or knocked out in 10 of his last 18 fights. It’s a heavyweight fight, and you always have to worry about Overeem’s chin, however if Volkov knocks Overeem out it will be the least powerful guy to plant Overeem in a long time.
In the end I think Volkov deserves to be the favorite here, but not a two dollar plus favorite. I expect Overeem to get some clinch work in against the fense to shorten exchanges while he works for the takedowns. For that reason I think the two bets you have to consider are as follows: