Welcome to my breakdown of today’s Cup Series race from New Hampshire Motor Speedway. Normally, I start these breakdowns hyping up how great the racing action is going to be and how awesome of a show we all have in store for us, WELL…. That couldn’t be farther from the truth today. They call it “The Magic Mile”, nut trust me, there is nothin magical about it. NHMS is one of the most boring tracks on the circuit IMO. Long, green flag runs, field gets spread out, and no one can gain any ground, just a snooze fest. And, with what we have seen out of this new car on the flat tracks this season, I’m not holding my breathe that today will be any better. But one thing that is awesome about this race is it has the single most delicious trophy in all of sports. The winner of today’s race gets the biggest damn LIVE lobster you will ever lay your eyes on, weighing over 20 pounds! I don’t even know what kind of pot one would use to boil that damn thing. I know it’s not the case, but I always chuckle at the image of the winning driver heading home with this big ass live lobster in the tub in the back of the RV. But it’s more than big ass lobsters today, we also have an opportunity to make a little cash, so let’s get to the goods on how to make that happen!

New Hampshire Motor Speedway is another short, flat track on the circuit that the series visits only once a year. The other comparable tracks to it that we have been to so far this season are Phoenix, Richmond, Gateway and even a little bit of Martinsville if you wanted to dig even further. The track that teams compared it to most coming into this week was Gateway, a lot of what we saw there should translate to today. The theme so far on the season for these short flat tracks is how hard it is to pass and move through the field. Track position is huge on these tracks and most gains seem to be made during pit stops and with pit strategies. Usually how we see these guys come off pit road is the order they tend to run in, during the run. The really fast cars will be able to make moves, but most of the field will be reliant solely on getting that track position and holding on to it.

Today’s race at New Hampshire is scheduled for a distance of 301 laps. This means we have around 210 dominator points on the Draftking’s slate. This is plenty of dominator points to go around and usually translates into some big scores. The 2019 and 2020 races here each saw 2 drivers score over 90 DK points off the back big dominator performances. Last year’s race had the majority of the Dom points split pretty evenly between 3 drivers, and each scored over 70 DK points. outside of those top dominator scorers, there were still more to go around. We saw an average of 5 guys per race score over 10 dominator points in those 3 NHMS races. It’s obvious there are plenty of dominator points and scooping up as many of those as possible today is going to be your ticket to taking down a GPP. In GPP you are going to want to have at least 3 guys in each line up that carry some level of dominator upside. Cash however, the safest route is likely still just a 2 Dom approach.

Top choice today has to be the man with all the momentum, Chase Elliott. Chase has had the best car on the track for 3 races in a row now, and has won 2 of the 3. Historically, this is not a great track for him, but we have seen him be dominate at Phoenix and Martinsville, so him being fast here would make sense. He did show solid speed in practice and qualified 2nd, so opportunity is there for him to snatch clean air and control stage 1 and beyond. Going to likely be very popular though.

If Chase controls the race and takes off and leads early then who is a guy that can be on his heels and could potentially dominate the second half? How about Kyle Busch from P17? Kyle is 2nd in Avg Pos, Avg Fin, and Fast Laps on the short flat tracks this season. He also was top 2 in every metric of the practice session from yesterday.  Got to love the combo of PD and Dominator potential here from Kyle. Again, going to be popular and the Chase/KFB stack is going to be a popular combo.

So if Chase does not end up taking control of this race early on then it’s hard to imagine it’s not the pole sitter Martin Truex Jr. We have seen clean air be HUGE on the flat tracks this season and passing has been incredibly hard. Truex showed more than enough speed in practice and qualifying to control this race early. He had one of the fastest cars a few weeks ago at Gateway and the team looks to have him set up with a car he likes again this week. DK has him tied as the odds on fav to win with Chase at +700.

HMS looks to have showed up much closer to the HMS we saw at Richmond than what we saw at Gateway. Not only was Chase fast, but both Larson and Byron was at the top of the charts. Byron, specifically was at the top in both fast lap and 5 lap average. Larson was 4th across the board in practice and the price has dropped too far on him, much easier for him to pay off this price tag than where we have been seeing him this season. Sports book still likes him to win at +800. Both have fast cars, starting with track position, and have potential of scoring Dom points with some win equity. What’s not to like?

A cheaper version of the KFB play today is Ross Chastain. Similar PD for Ross from the 18th starting position and he has been almost as good as KFB on the short flat tracks with the 4th best avg. position and avg. finish. He’s one of the best cars week in and week out, despite the constant run ins with everyone on the track. Maybe his mediocre practice speeds coupled with his recent string of incidents will keep his ownership down today, if that happens I’d be tempted on being over here in GPP.

I’m really not sure what to do with the Penske guys today. They were terrible in practice yesterday but they are normally really good on the short flat tracks. Blaney has been the best by every metric between the trio of Phoenix, Gateway and Richmond. Logano was the fastest car at Gateway and went on to win there. Their practice speeds just don’t make sense, all 3 were so slow. Makes it hard for me to go there, practice speeds generally correlate a ton on these short flat tracks. If anything, they would make for some interesting tournament options.

There are some great options here in the Mid tier range. Briscoe and Bowman are both great, but chalky, PD options in this range. Briscoe obviously won at Phoenix and had great speed in practice. Like his HMS teammates, this price is too low for Bowman, even without the P27 starting position. Cindric will likely be popular too, but I’m not really interested for the same reason I’m not on his Penske teammates. Harvick and Almirola are two more SHR drivers that I like in this range. Both these guys have a strong history at NHMS, on short flat tracks, and on short flat tracks this season. Great speed in practice as well, both these guys have a little bit of dominator potential as well. Eric Jones might go overlooked again this week and provides solid PD potential from his 22nd starting position. He finished 7th at Gateway and has the 6th best 5 lap average in practice.

The two most popular guys in this range today are likely going to be the Dillon brothers. Ty starts 35th and is dirt cheap at $5400 while showing decent speed in practice. Austin starts 30th and has been pretty consistent on the short flat tracks this season. His practice speeds weren’t great, but same could of been said for Richmond this season and he finished 10th there. If your looking for pivots though there are several options I like. Haley was 16th fastest in practice and has 2 top 17 finishes on short flat tracks this season. Buescher showed top 10 speed in practice and finished 10th at Phoenix earlier this season. Custer, as my cohort Coopdog pointed out to me, is a solid flat track racer. He had decent speed in practice and has finishes of 8th and 14th in his 2 career NHMS starts. And lastly, it looks like Burton is also in play in this range. He starts way back in 31st but was 13th fastest in practice and 6th fastest on both 10 lap and 15 lap average. He’s tough to trust, but a solid pivot option off chalk Ty for a similar price tag.

Below is my cheat sheet for today’s Cup Series race from NHMS. I have included all the most important stats you will need to make your decisions today. I included the FL, 5 lap, 10 lap, and 15 lap average data from yesterday’s practice session. The green header contains averages from Phoenix, Richmond and Gateway. Blue header is finishing position form those races, I also isolated fast lap and lap led data from Gateway. And finally, the orange header contains data from the last 3 New Hampshire races. 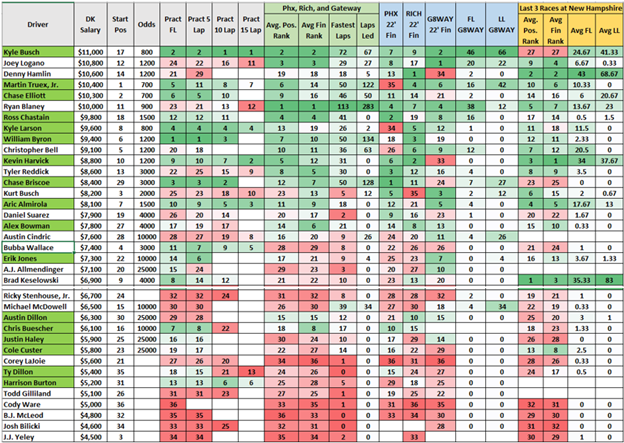 Below is my Core for Cash games today. I’d round it out with some chalky PD options and call it a day with cash. For GPP you can toss in another value guy and pay up for another guy with dominator upside. Can also use some of the pivots mentioned to pivot off either Chase or KFB in GPP, or both. Good luck today, remember for GPP’s that it’s all about who ends up with the track position on the last run, not necessarily who has the best cars. 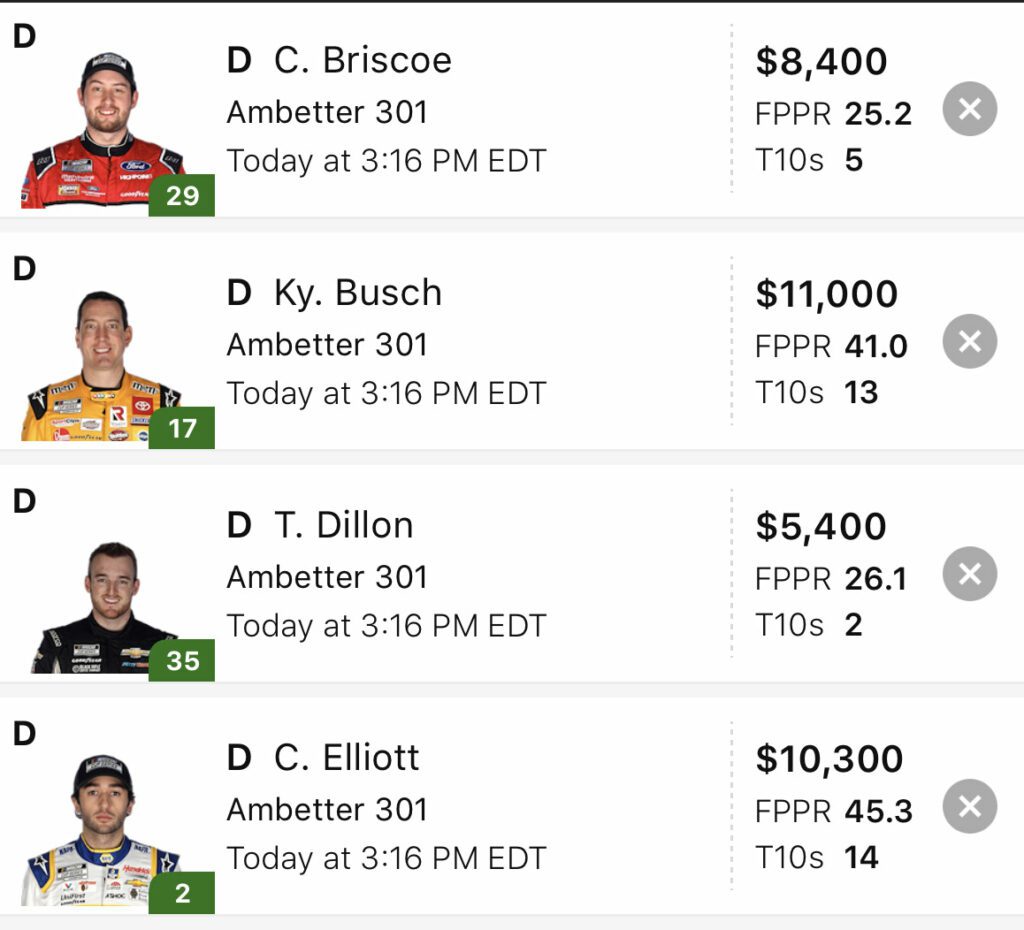