Welcome to my breakdown of today’s Cup Series race from Viva Las Vegas! That’s right, the Cup series boys are going to sin city to roll the dice at this 1.5 mile track. Roll the dice might not be the right analogy, it’s more like Russian roulette with Goodyear tires that could blow at any moment. All season long we have seen these races on 1.5 mile tracks turn into shit shows with the fastest cars randomly blowing out tires 30 laps in to a run. I do not expect today’s race to be any different. Same tire codes from the recent races at Kansas and Texas that saw tire issues, and the spring race here had tire issues. Expect massive tilt and whatever you do, do not count your money till the end!

The Goodyear tire issues has more of an impact on these slates than just ruining some drivers days. The constant cautions and endless caution laps lowers the amount of fast laps that can be scored on the slate. The frequent cautions also jumbles up the field and creates varying different pit strategies that get multiple different guys to the lead through the race. These factors make it hard for a driver to put up a big dominator performance. In the spring race here the most Dom points anyone scored was 33 and only 1 other driver scored more than 20. After the top two drivers, 5 others scored between 10 and 20 Dom points. I expect a very similar spread of Dominator points in today’s race.

With dominator points being somewhat capped today, the big focus in my builds will be centered around position differential, and today’s slate offers us up a ton of that to target. In the Vegas spring race, 10 of the top 11 DK scores came from drivers who started outside the top 10. This is also a race where those big time PD plays can also be a combo dominator play. The top two Dom scores from the Spring race this year came from drivers who started P18 and P37. Fading the whole Top 10 starters is a viable strategy today and is a good way to get some different constructions without fading some of the lay up PD chalk on the slate.

The obvious lock here in this range is Denny Hamlin. Denny is about as much of a free square as you can get. Ton of PD offered up by my top rated driver on 1.5 mile tracks this season. I might have him in every line up. Tyler Reddick is going to be very popular from the pole. Absolutely a contender today, was real strong on this tire code at Kansas and Texas. I like the idea of fading though in GPP, a lot can go wrong at this price tag from the pole on a 1.5 mile track. Love The Watermelon man Ross Chastain today. Had a rocket here in the spring and in practice yesterday. He brings both PD and Dominator potential! A potentially lower owned pivot option could be Larson. He has burnt a lot of people this season so I can see people skipping him today. But 1.5 miles tracks are his bread and butter this year, and he brings PD today!

Ryan Blaney is another guy in this range I expect to be popular. Fastest in every metric in practice will definitely draw attention. I think I’m likely fading him as well in GPP though. He had a tire issue at the end of practice, was he actually fast or was he running low tire pressure? Not a track type I expect Blaney to dominate at this season and he is going to have to dominate to compete with the PD on the slate. Last two guys to round out this range is Kyle Busch and Martin Truex. I love both of these guys today. Not concerned with Toyotas practice speed, they have been fast on 1.5s all season so I expect them to get it right. A ton of upside here from both. KFB will likely be the lower owned of the two due to starting higher and priced higher, love him in GPP.

This range has some solid, high upside plays that could go under the radar. Bubba Wallace is one of my favorite GPP plays on the slate today. Won at Kansas in this car on this tire code, finished 2nd at Michigan. Solid speed in practice and 5th best Average finish on comparable tracks. Another guy I like that will likely be a little higher owned than Bubba is Chase Briscoe. We didn’t see much out of him in practice but he did put up the 7th best fast lap. He also finished Top 5 at Texas and 13th at Kansas 2. Another solid option in this range is Noah Gragson in the #48 HMS Chevy. Gragson looks poised to make his jump to Cup and is making the best out of his opportunity thus far in this 48 car. He is great on these momentum 1.5 mile tracks and he is driving for the team that won here in the Spring.

Love me some Eric Jones today. Car looked fast in practice so he is probably going to carry some ownership, but likely not a ton from P22. He did finish 6th at Texas a few weeks ago on this tire. Last, but certainly not least in this range is Aric Almirola. Really like Aric today and think we might get him at a lower ownership. He finished 6th here back in the spring and looks to have speed again today as he was top 6 in practice speeds. Brad Keselowski is likely going to be popular here with his name and starting position. 1.5 mile tracks has been a weak spot for this team as BK has only finished better than 14th once on the comparable tracks from this season. Practice did not give us any reason to think today is going to be any better. Like fading here in GPP but fine for cash considering he should be popular.

My favorite play in this range has to be Justin Haley. Team has been getting better and better each week. They now have 6 straight Top 20 finishes with TWO top 5 finishes in that stretch. That’s just not the type of upside you should be getting for $5800, too cheap. Had top 10 5 lap average in practice too. Not sure what ownership will be, but it’s normally pretty spread out on the value town drivers. One guy though who should definitely be low owned is Justin’s teammate AJ Allmendinger. Las Vegas is probably the Dinger’s best 1.5 mile track. This is his first 1.5 mile race in the 16 this season but it looks to be tuned in right as he was Top 6 in every practice metric. Last two options I like in this range are Ty Dillon and Todd Gilliland. Both are very similar plays, Dillon is likely the “safer” of the two, but Gilli should be the lower owned option. Also worth noting, Gilli showed decent speed in practice.

Below is my Cheat Sheet for today’s Cup Series race from Vegas. I have pulled and ranked data from the last 6 comparable tracks/races: Texas, Kansas2, Michigan, Pocono, Charlotte, Kansas1. I have also included FL, 5 Lap, and 10 lap data from yesterday’s practice session. There is a new addition to the sheets as well, I included Avg Start Rank and DK Rank, It’s a good metric to see how drivers have scored in comparison to where they start on average. Lastly, drivers highlighted in green are drivers I like and stats that are highlighted blue are stats from the CAR being driven, not the specific driver in it today.

Below is my Cash core for today. Really just want to stick to the PD plays in cash today, no reason chasing Dom points in cash. 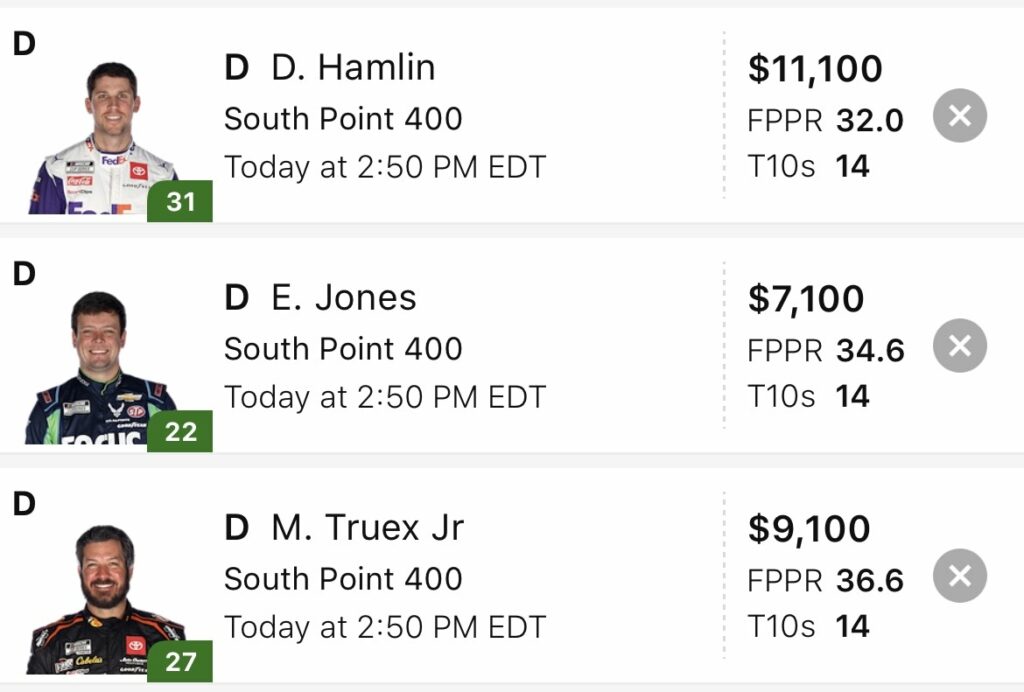 Below is my Core for GPP. From here I like to either go with Larson, Chastain, or even Truex as my next man in. Good luck today! 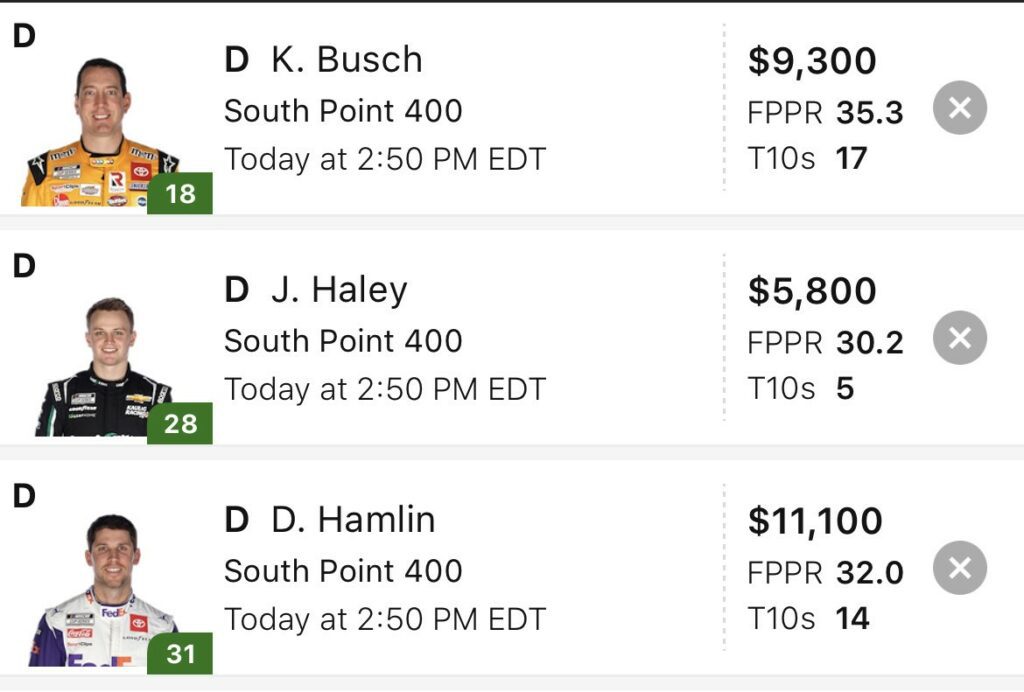